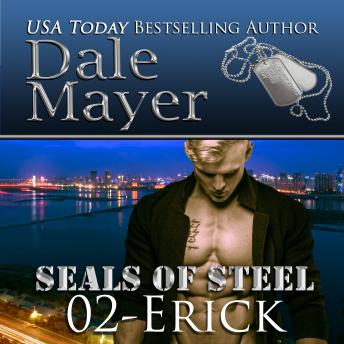 Erick: Book 2 of SEALs of Steel

Book 2: SEALs of Steel
Two years earlier, Erick Fuller, a former SEAL, was severely injured when his squad's truck drove over an antitank landmine. He lost his lower leg and two fingers. He's filled with steel plates and titanium pins...along with the driving need for answers and justice. Six other team-mates were also badly hurt, the seventh dead, in what their team leader Badger Horley realized later had to be a trap set to take them out. After joining the team in England and finding a link to the antitank landmine used in the explosion, Erick heads to Kabul--to the site where the original incident took place--for more intel. What he discovers there blows him away...
Honey Lewis, an innovative leader in the field of dentistry, is invited to a cutting-edge stem cell research conference. The man who issued the last-minute invitation is someone she met at a similar workshop years earlier. While she knows she doesn't have the experience, she nevertheless can't resist attending to learn the industry's latest. Once she arrives in Kabul, she runs into another man--one she never expected or hoped to see again. She met Erick a year ago in New Mexico when she smashed into his beloved, vintage '69 Mustang. Unbelievably, he's still upset about the accident. If only his overexcitement didn't bring out corresponding emotions in her...
With too many things going on at once--in her life and inside her own heart--the tug-of-war all but blindsides her with the realization that the man who befriended her might not be the man she thought he was.

Erick: Book 2 of SEALs of Steel