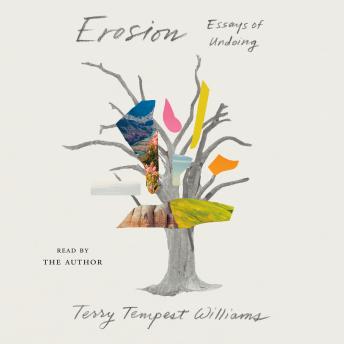 Fierce, timely, and unsettling essays from an important and beloved writer and conservationist

Terry Tempest Williams is one of our most impassioned defenders of public lands. A naturalist, fervent activist, and stirring writer, she has spoken to us and for us in books like The Hour of Land: A Personal Topography of America’s National Parks and Refuge: An Unnatural History of Family and Place. In these new essays, Williams explores the concept of erosion: of the land, of the self, of belief, of fear. She wrangles with the paradox of desert lands and the truth of erosion: What is weathered, worn, and whittled away through wind, water, and time is as powerful as what remains. Our undoing is also our becoming.

She looks at the current state of American politics: the dire social and environmental implications of recent choices to gut Bears Ears National Monument, sacred lands to Native People of the American Southwest, and undermine the Endangered Species Act. She testifies that climate change is not an abstraction, citing the drought outside her door and at times, within herself. Images of extraction and contamination haunt her: “oil rigs lighting up the horizon; trucks hauling nuclear waste on dirt roads now crisscrossing the desert like an exposed nervous system.” But beautiful moments of relief and refuge, solace and spirituality come—in her conversations with Navajo elders, art, and, always, in the land itself. She asks, urgently: “Is Earth not enough? Can the desert be a prayer?”