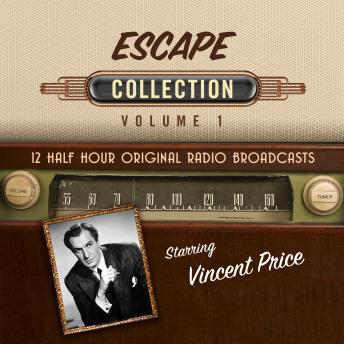 Escape was radio’s leading anthology series of high-adventure, airing on CBS from July 7, 1947, until September 25, 1954. The series’ well-remembered opening combined Mussorgsky’s Night on Bald Mountain with this introduction, as intoned by Paul Frees and/or William Conrad: Tired of the everyday grind? Ever dream of a life of romantic adventure? Want to get away from it all? We offer you... Escape! Following the opening theme, a second announcer (usually Roy Rowan) would add: Escape! Designed to free you from the four walls of today for a half-hour of high adventure! Many story premises, both originals and adaptations, involved a protagonist in dire life-or-death straits. Starring Vincent Price, William Conrad, Paul Frees, Jack Webb, Frank Lovejoy, Elliott Lewis, Edgar Barrier, John Dehner and Peggy Webber. Music was supplied by Del Castillo, organist Ivan Ditmars, Cy Feuer, Wilbur Hatch, and Leith Stevens. The announcers were Paul Frees and Roy Rowan. Enjoy 12 exciting half-hour adventures from the long-running Escape radio series.
7-14-47 Operation Fleur de Lis
7-28-47 Typhoon
8-4-47 Sire de Maletroit’s Door
10-15-47 A Shipment of Mute Fate
2-22-48 How Love Came to Professsor Guildea
3-21-48 Misfortune’s Isle
2-26-49 Red Wine
3-26-49 The Adaptive Ultimate
5-19-50 Pass to Berlin
6-30-50 Blood Bath
10-22-50 The Time Machine
8-30-51 The Man Who Stole the Bible