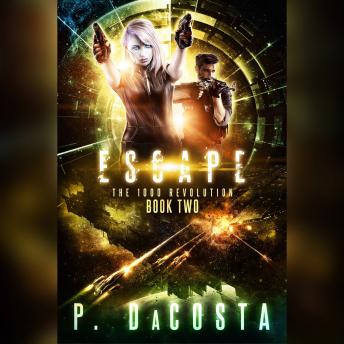 'There’s no quicker way to get yourself killed than trusting someone in the black.' ~ Caleb.


Caleb Shepperd knows Fran has her own motives for helping him escape prison, but he’s not about to let a little thing like past betrayal stand in the way of his next paycheck. Until he’s forced to meet with the sexy and psychotic pirate, Adelina Cande. They’ve met before. When he seduced her, cleared out her credit account, and left her for dead in-the-black.

Caleb figures Adelina holds a grudge when she plants a bomb on his ship and demands he steal a fleet freighter for her, that is, if he ever wants to fly again. Get him drunk enough and he’ll try anything once, but this time, he has to balance his own greed, with the needs of a vengeful pirate and the scheming of his dubious second-in-command, Fran. What could possibly go wrong?

In the heart of Chitec headquarters, #1001 enlists an eager young technician to aid in her escape. But it’s not freedom she wants. It’s revenge. The memories of a life that don’t belong to her demand she finishes what she started. She believes she killed Caleb, now she's targeting Chitec CEO Chen Hung, and not even the hopeful technician can dissuade her.

She thought she knew the truth.