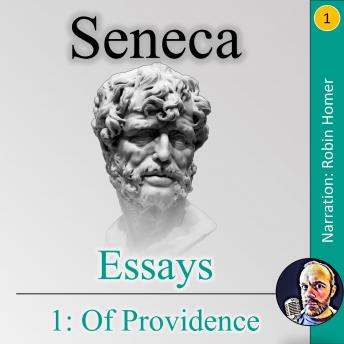 The first book in the essays of Seneca deals with good and evil. The dialogue is opened by Lucilius complaining with his friend Seneca that adversities and misfortunes can happen to good men too. How can this fit with the goodness connected with the design of providence? Seneca answers according to the Stoic point of view. Nothing actually bad can happen to the good man (the wise man) because opposites don't mix. What looks like adversity is in fact a means by which the man exerts his virtues. As such, he can come out of the ordeal stronger than before.
So, in perfect harmony with the Stoic philosophy, Seneca explains that the truly wise man can never surrender in the face of misfortunes but as he will always go through them and even if he should fall he will continue fighting on his knees. The wise man understands destiny and its design, and therefore he has nothing to fear from the future. Neither does he hope for anything, because he already has everything he needs - his good behaviour.
The conclusion is that actually nothing bad happens to good men. One just has to understand what bad means: bad for the wise man would be to have bad thoughts, to commit crimes, to desire money or fame. Whoever behaves wisely already has all the good possible.
Translation by Aubrey Stewart and Produced by Vox Stoica
Seneca's Essays Series:
1) Of Providence - addressed to Lucilius
2) On the Firmness of the Wise Man - addressed to Serenus
3,4,5) Of Anger (Books 1-3) - addressed to his brother Novatus
6) On Consolation - addressed to Marcia
7) Of a Happy Life - addressed to Gallio
8) Of Leisure - addressed to Serenus
9) On Tranquillity of Mind - addressed to Serenus
10) On the shortness of life - addressed to Paulinus
11) On Consolation - addressed to Polybius
12) On consolation - addressed to Helvia