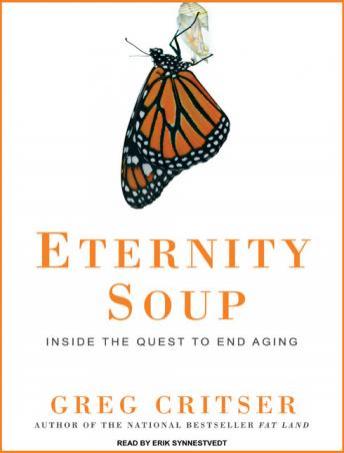 Eternity Soup: Inside the Quest to End Aging

What happens when you mix modern medical entrepreneurship with one of the most ancient of human desires-the desire to live forever? The answer is today's multibillion-dollar antiaging industry, which promises everything from restoring lost vitality to actually turning back the hands of time for aging boomers. But who, exactly, makes up the antiaging movement, and what do they expect from the vast and growing antiaging apothecary? Who is simply manufacturing money from spurious claims and dubious products, and who is performing legitimate scientific research? One thing is clear: by the mid-twenty-first century, America will have one million centenarians. How much older, then, can (and should) we get?

Sharp, funny, fast-paced, and deeply informed, Eternity Soup is a full-course meal about our quest for immortality, spiced with human vanity, chicanery, and cutting-edge science.

Eternity Soup: Inside the Quest to End Aging