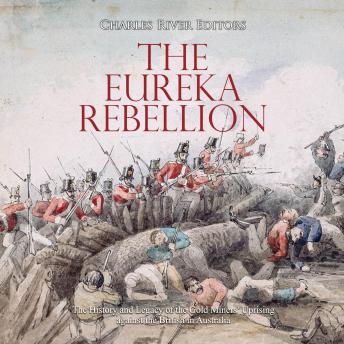 Eureka Rebellion, The: The History and Legacy of the Gold Miners’ Uprising against the British in Australia

Although Australia was actually colonized by the forced dispossession of the indigenous Aboriginals, the Commonwealth of Australia came about by the free federation of six self-governing British colonies in 1901, which makes it one of just a handful of nations that can proudly claim this.[1] Thus, Australia is often imagined as a nation untouched by the pains that have accompanied the births of most other nations.

While it is certainly true that the founding fathers of the Australian federation discussed the future of their nation without the fear of war, it is equally true that Australia’s history was shaped by violence. Along with the forced dispossession of indigenous populations across the continent, there were occasional uprisings among the transported convict population in early colonial times, notably the Castle Hill Convict Rebellion of 1804. In that conflict, 233 Irish convicts faced 97 British soldiers, resulting in the deaths of 15 prisoners. Then there was the so-called Rum Rebellion in 1808, when the New South Wales Corps led by Major George Johnston and the pastoralist John Macarthur deposed the Governor of New South Wales, William Bligh. This event was notable in being the only successful seizure of political power by force of arms in the history of colonial Australia.[2] To the list of politically violent deeds, many historians and commentators add the acts of some bushrangers, notably Ned Kelly (1854–1880), who is often regarded as a political revolutionary.[3]

In the relatively short history of colonial Australia, one event stands apart, both for its revolutionary spirit and its impact: the Eureka Rebellion of December 3, 1854. This was the only time in Australian history when a government was resisted by free subjects of the Crown in a violent conflict. It only took place in one colony, Victoria, but it was an important event in the evolution of the democratic government in Australia as a whole.

Eureka Rebellion, The: The History and Legacy of the Gold Miners’ Uprising against the British in Australia