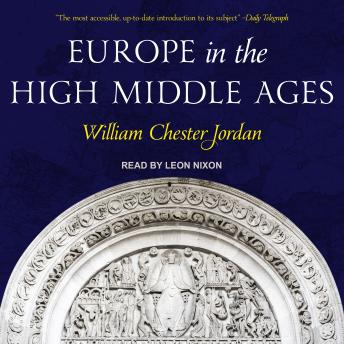 Europe in the High Middle Ages

It was an age of hope and possibility, of accomplishment and expansion. Europe's High Middle Ages spanned the Crusades, the building of Chartres Cathedral, Dante's Inferno, and Thomas Aquinas. Buoyant, confident, creative, the era seemed to be flowering into a true renaissance-until the disastrous fourteenth century rained catastrophe in the form of plagues, famine, and war.

In Europe in the High Middle Ages, William Chester Jordan paints a vivid, teeming landscape that captures this lost age in all its glory and complexity. Here are the great popes who revived the power of the Church against the secular princes; the writers and thinkers who paved the way for the Renaissance; the warriors who stemmed the Islamic tide in Spain and surged into Palestine; and the humbler estates, those who found new hope and prosperity until the long night of the 1300s. From high to low, from dramatic events to social structures, Jordan's account brings to life this fascinating age.

Europe in the High Middle Ages