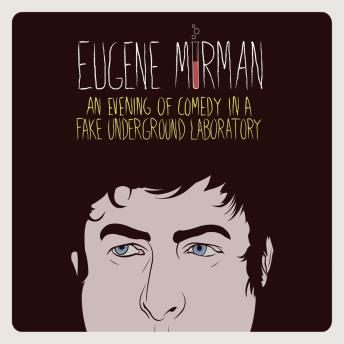 An Evening Of Comedy In A Fake Underground Laboratory

Popularly known as the voice of "Gene Belcher" on the animated comedy Bob's Burgers,
Eugene was named America's #1 Noticer by Standup
Magazine four years in a row (not true - he made up
that magazine). In his first one-hour Comedy Central
special, "Eugene Mirman: An Evening of Comedy in a
Fake, Underground Laboratory," Mirman tells stories,
holds up pieces of paper, and gets people in the
audience to pee on each other with a simple glance (this
is the second and last lie). He doesn't care what it says
here and is wiggle wiggle poddle wee wee lollipop.
"YOUR MIND-G-SPOT WILL LOVE EUGENE'S HOUR
SPECIAL!" - Ronald Reagan, right before he died.
Eugene's fourth full-length album is combined with his
one-hour Comedy Central special and bonus features on a separate DVD. That's what we
call value.

Evening Of Comedy In A Fake Underground Laboratory