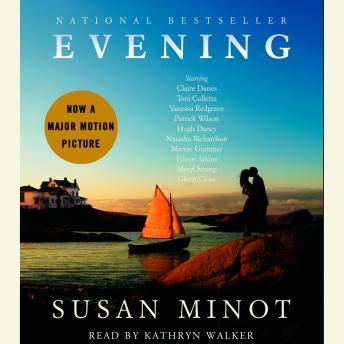 With two novels and one short story collection published to overwhelming critical acclaim ("Monkeys takes your breath away," said Anne Tyler; "heartbreaking, exhilarating," raved the New York Times Book Review), Susan Minot has emerged as one of the most gifted writers in America, praised for her ability to strike at powerful emotional truths in language that is sensual and commanding, mesmerizing in its vitality and intelligence. Now, with Evening, she gives us her most ambitious novel, a work of surpassing beauty. During a summer weekend on the coast of Maine, at the wedding of her best friend, Ann Grant fell in love. She was twenty-five. Forty years later--after three marriages and five children--Ann Lord finds herself in the dim claustrophobia of illness, careening between lucidity and delirium and only vaguely conscious of the friends and family parading by her bedside, when the memory of that weekend returns to her with the clarity and intensity of a fever-dream. Evening unfolds in the rushlight of that memory, as Ann relives those three vivid days on the New England coast, with motorboats buzzing and bands playing in the night, and the devastating tragedy that followed a spectacular wedding. Here, in the surge of hope and possibility that coursed through her at twenty-five--in a singular time of complete surrender--Ann discovers the highest point of her life. Superbly written and miraculously uplifting, Evening is a stirring exploration of time and memory, of love's transcendence and of its failure to transcend--a rich testament to the depths of grief and passion, and a stunning achievement.