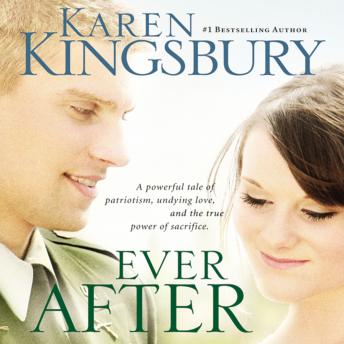 In Ever After, bestselling author Karen Kingsbury has created a moving sequel to Even Now. The book opens as Emily Anderson, now twenty years old, attends college on a soccer scholarship. Through an off-campus job at Fort Lewis, Emily meets a young Army reservist, Justin Baker. Their love-deep, emotional, and built on the foundation of a shared faith-blooms into plans for marriage. Even Emily's parents, Lauren Gibbs and Shane Galanter, draw inspiration from this shining young relationship.But Shane and Lauren are being tested as they themselves make wedding plans. Although Shane works as a Top Gun instructor, Lauren still strongly opposes the war in Iraq. As Lauren and Shane struggle to breach the gulf between them, Lauren decides that the task is impossible. She returns to her job as a war correspondent in Afghanistan.Emily must say goodbye to Justin as he goes off to serve in Iraq. Then tragedy changes everything. Can Lauren and Shane do what they think is impossible-set aside their opposing views so that God's love can win no matter how great the odds?Also available: audio CD edition.

This title is due for release on December 19, 2006
We'll send you an email as soon as it is available!