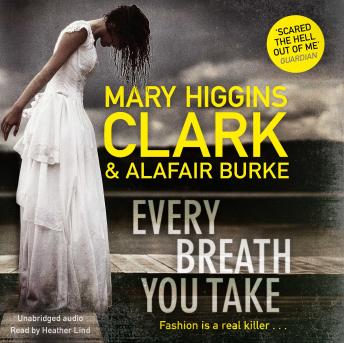 Every Breath You Take

The Met Gala ball: the world’s most glamorous fundraising party, an incredible night where the rich and famous wear extraordinary designer gowns and rub shoulders in New York’s famous Metropolitan Museum of Art. People would kill for an invitation.

Three years ago, Virginia Wakeling, a member of the Met’s board of trustees and one of the museum’s most generous donors, was found dead in the snow outside the building. Police soon discovered that she’d been thrown from the roof during the Met Gala, but no one has ever been arrested for her murder.

Although suspicion has always hovered around Virginia’s much younger boyfriend, there are a bevy of suspects. Laurie Moran decides to investigate Virginia’s death for her successful cold-cases television show, Under Suspicion. But the more she pries into Virginia’s murder, the closer Laurie comes to discovering just how dangerous an invitation to the Met Gala can be…

‘Clark and Burke's collaboration is as smooth as rum and coke, with just enough kick to make the reader thirsty for another’ Publishers Weekly on All Dressed in White

Every Breath You Take