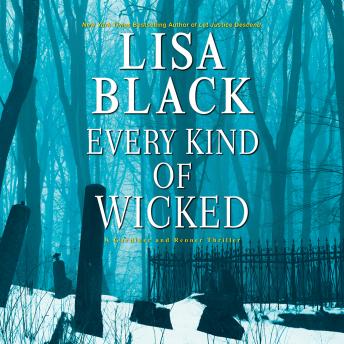 Every Kind of Wicked

#6 of Gardiner and Renner

Life and death have brought Maggie Gardiner full circle, back to the Erie Street Cemetery where she first entered Jack Renner’s orbit. Eight months ago, she learned what Jack would do in the name of justice. More unsettling still, she discovered how far she would go to cover his tracks. Now a young man sprawls atop a snowy grave, his heart shredded by a single wound. A key card in the victim’s wallet leads to the local university’s student housing—and to a grieving girlfriend with an unsettling agenda.

Maggie’s struggle to appease her conscience is complicated by her ex-husband, Rick, who’s convinced that Jack is connected to a series of vigilante killings. Also a homicide detective, Rick investigates what seems like a routine overdose on Cleveland’s West Side, but here, too, the appearance belies a deeper truth.

Rick’s case and Jack’s merge on the trail of a shadowy, pill-pushing physician, who is everywhere and nowhere at once, while Maggie and Jack uncover a massive financial shakedown hiding in plain sight. And when Rick’s bloody fingerprint is found at another murder scene, Maggie’s world comes undone in a violent, irreversible torrent of events...