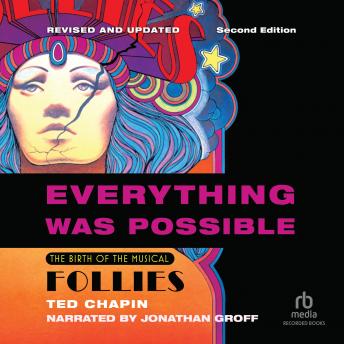 Everything Was Possible (Updated Edition): The Birth of the Musical Follies

As the sole production assistant for Stephen Sondheim’s Follies, Ted Chapin had a front row seat for the creation of one of the most important American musicals of all time. He kept a detailed journal of his experiences, and his rich storehouse of
memories forms the core of Everything Was Possible, which itself has become a modern classic of musical theater history. Chapin was there in the drama-filled rehearsal room, typed endless rewrites, ferried new songs around town,
pampered the film and television stars in the cast, and traveled with the show to its Boston tryout and back to New York for the opening night on Broadway.

Combining the zeal of an enthusiast with a journalist’s narrative chops, Chapin takes the reader on a roller-coaster ride through the creation of an original Broadway musical.

Updated to celebrate the fiftieth anniversary of Follies, this edition includes a new afterword that brings the history of the show forward to today, diving into recent productions around the world, new recordings, the continued promise of a film
version, and the legacy of the show in the wake of Stephen Sondheim’s death in 2021.