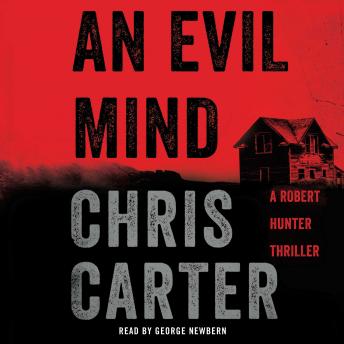 An Evil Mind: A Novel

A prolific and ingenious serial killer is unmasked by a Los Angeles detective with a dark past of his own in this “roller coaster ride that will leave you breathless” by Top 10 Sunday Times (UK) bestselling author Chris Carter.

A freak accident in rural Wyoming leads the sheriff’s department to arrest a man for a possible double homicide, but further investigations suggest a much more horrifying discovery: a serial killer who has been kidnapping, torturing, and mutilating victims all over the United States for at least twenty-five years.

The suspect claims he is a pawn in a huge labyrinth of lies and deception—but can he be believed?

The case is immediately handed over to the FBI, but this time they’re forced to ask for help from ex-criminal behavior psychologist and lead detective with the Ultra Violent Crime Unit of the LAPD, Robert Hunter. As he begins interviewing the apprehended suspect, terrifying secrets are revealed, including the real identity of a killer so elusive that no one, not even the FBI, had any idea he existed…until now.

This dramatic and suspense-laden thriller, perfect for fans of Thomas Harris’s classic The Silence of the Lambs, has “twists and turns and cliff-hangers abound” (Booklist) and will keep you guessing until the very last page.