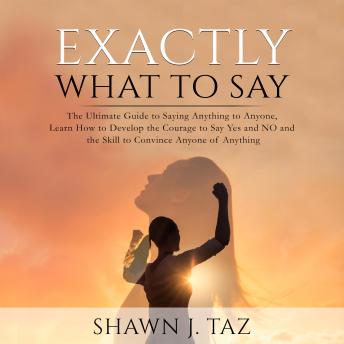 Exactly What to Say: The Ultimate Guide to Saying Anything to Anyone, Learn How to Develop the Courage to Say Yes and NO and the Skill to Convince Anyone of Anything

Exactly What to Say: The Ultimate Guide to Saying Anything to Anyone, Learn How to Develop the Courage to Say Yes and NO and the Skill to Convince Anyone of Anything
Are you someone who can't seem to say NO to anyone? Do you find yourself in situations like someone who you're not even that close to asked you to do something for him and you can't find the courage to say no? Or are you on the other end of the spectrum? Someone who is always saying no whatever the situation is? Someone asks for your help but you try and rationalize it by thinking you don't want your friend or relative to get used to asking for your help.
Some of the problems we have in life can either be because we agree too much or we refuse things a lot. Sometimes, we end up regretting these decisions later on. There is a balance we should learn on knowing when to say yes and when to say no. This audiobook will show you how to decide when you can agree or refuse something. It will also show you how to accept something in an elegant manner as well as the skill on how to say no politely. You will also learn how to quickly analyze situations so you know whether to say yes or no at any given situation. The audiobook will also teach you how you can speak with anyone about anything in a convincing manner. This is the basic knowledge everyone should learn.
In this audiobook, you will discover the following:
- Why We Say Yes When We Want to Say No
- When to Say YES
- When to Say NO
- The Dangers of Saying Yes Too Much
- The Pitfalls of Saying No Too Much
- Striking the Balance Between Saying Yes and Saying No
- Agreeing Elegantly
- Refusing Politely
- Ensuring There Are No Hurt Feelings
It is really important to only say Yes or No only when you really want to or to things that you want to do. It is important that you sound as sincere and genuine as possible.

Exactly What to Say: The Ultimate Guide to Saying Anything to Anyone, Learn How to Develop the Courage to Say Yes and NO and the Skill to Convince Anyone of Anything