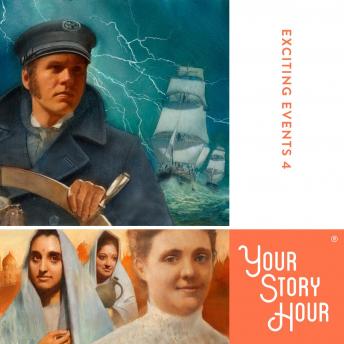 Written By: Your Story Hour

In 1810 a teenage American sailor, Joseph Bates, is abducted by the notorious British press gang. Listen as he is unjustly forced into the King's navy, then escapes only to be seized again. Released six years later, he works as a merchant seaman surviving ocean perils and harrowing storms. Joseph's skill and courage result in his becoming a trusted sea captain. His marine adventures continue, yet Joseph feels the need for faith in his life. Hear the inspiring story of Ida Scudder, a gifted physician/missionary. She could not ignore the needs of India's women who were suffering and dying-kept from receiving the urgent medical care they needed by cultural restrictions. Then travel with us to the early 1700s in Dresden, Germany. Ludwig, Count of Zinzendorf, was of noble birth, and schooled to be a lawyer. Using his influence to help others, young Ludwig believed 'no man liveth unto himself.' His love of missions and impact for good still resonates today. Great listening for the whole family!

by Your Story Hour