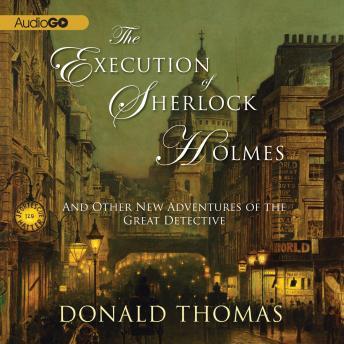 The Execution of Sherlock Holmes: And Other New Adventures of the Great Detective

Drugged, manacled, condemned to a dank cell in the depths of London's infamous Newgate prison, the world's greatest literary detective awaits execution by a vengeful crew of formidable enemies. Escape is impossible; death, a certainty. But not for Sherlock Holmes, who, in a stunning display of intellect and derring-do, will elude his hangman's noose and live to fiddle, spy, and ratiocinate another day.
Against tremendous odds Holmes will continue to defy his enemies in four more encounters, from cracking German intelligence codes, to going against Scotland Yard and the Crown in proving the innocence of a man condemned to death for the slaying of a pregnant serving girl, to an arsenic-wielding magician, and of course, to a battle of wits with the malevolent Moriarty. Everywhere in these five finely wrought tales, riddles and mystery hover in the air. But they are not beyond the grasp of the incomparable Sherlock Holmes.

Execution of Sherlock Holmes: And Other New Adventures of the Great Detective