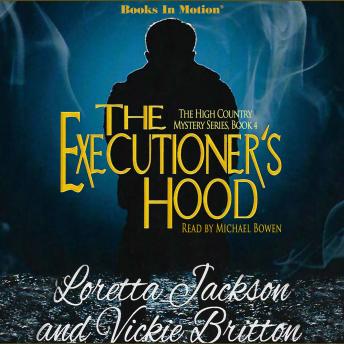 Who killed Judge Grayson? When Sheriff Jeff McQuede finds Durmont's highly respected judge, Phil Grayson, bludgeoned to death in his study, a black executioner's hood shoved over his head, he faces his toughest case yet. The judge has many enemies, including Darin Keefe, sentenced by Grayson and just released from prison. McQuede soon finds out that Keefe's case is linked to a city scandal that may involve Grayson. Seven years ago the judge's best friend, John Harwood, was believed to have taken a bribe from Keefe Construction and to have committed suicide rather than face conviction. Had Keefe, taking the fall, left prison intent on revenge? Or is the judge's murder the result of a robbery gone wrong? Grayson died surrounded by his fabulous Old West outlaw collection, including a death mask, a famous Peacemaker, and other rare artifacts. The intruder could have been after some unknown item of great value. Is the judge's murder a simple burglary gone wrong or a case of modern-day vigilante justice?