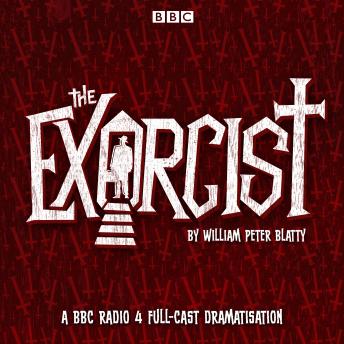 ‘When a radio play is this good, the devil really is in the details’ Radio Times

Summoned to a case of apparent possession, Father Karras is at first sceptical, then horrified. The victim –a 12-year-old girl named Regan – seems to be controlled by a malign supernatural force that makes her swear, blaspheme, scream in agony and perform appalling acts. Attempting to find a rational explanation for the girl’s behaviour, Karras tries to talk to Regan, only to find himself locking horns with the demon inside her head. Its many voices mock him, tormenting him with his weakness, doubts and buried guilt. With his faith in God and humanity tested to the limit, Karras turns to the ultimate solution: exorcism…

The film version of The Exorcist is widely considered to be one of the most terrifying movies ever made. This new, full-cast radio drama is just as chilling, suspenseful and shocking, while also retaining the depth and psychological complexity of Blatty’s original novel. Adapted by Sony Award-winning dramatist Robert Forrest, it stars Robert Glenister as Karras, Alexandra Mathie as the Demon and Ian McDiarmid as Merrin.