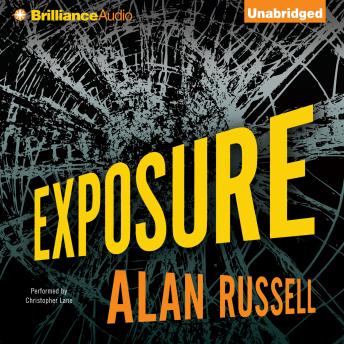 Capturing the seedy and sordid side of life isn’t anything new for photojournalist-turned-paparazzo Graham Wells. But when a shoot turns deadly—secretly causing the car crash that takes the lives of two beloved public figures—he knows the ensuing media spotlight could easily destroy him. Fortunately, no one else knows his shameful secret except for a mysterious CIA operative, and that clandestine agent swears he’ll keep quiet…for a price.
Blackmailed into documenting the orchestrated downfalls of some of Hollywood’s biggest stars, Graham finds his role in the operation disturbingly murky. But the picture soon begins to clear and comes into horrifying focus after he prevents the suicide of celebrated actress Lanie Byrne, revealing a sprawling web of lies that reaches from the glittering lights of Hollywood to the dark political intrigue of Europe and Washington, DC.
A page-turning thriller, Alan Russell’s Exposure is a fast-paced and riveting read focusing on an international conspiracy and a truth-seeking antihero armed only with a camera.