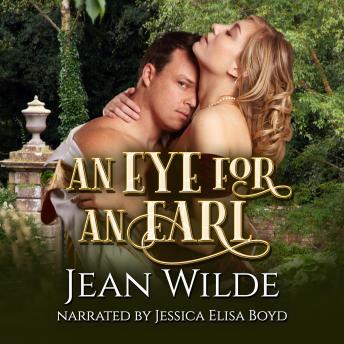 An Eye for an Earl

#2 of The Scarlet Salon

Hell hath no fury like a lady of society scorned...

Isabelle Beaumont may be the most sought-after courtesan in London, but once she'd been a highborn lady of society. Betrayed by her loved ones, she was cast out of her home and consigned to a life on the streets. Falling under the protection of an unlikely ally, Isabelle has done more than just survive.

A twist of fate has made Francis Gilbert the heir to a title, along with the debt-ridden estate that goes with it. As the new Earl of Digby, he's determined to live up to his responsibilities. The last thing his reputation needs is to be linked to the mysterious Belle Beaumont. As unsuited as they are, attraction sizzles between the pair of them.

Isabelle is captivated by the straight-laced earl who refuses to bend to her will. Her game of seduction turns into an affair of the heart, one that puts them both in danger. Isabelle realizes too late that her once silent ally isn't willing to let her go.

To what ends will he go to keep her all to himself? Demons of the past battle with hope and redemption. Can love replace Isabelle's burning desire for vengeance? Journey back in time to a world of class and hidden passions.

This title is due for release on April 11, 2020
We'll send you an email as soon as it is available!