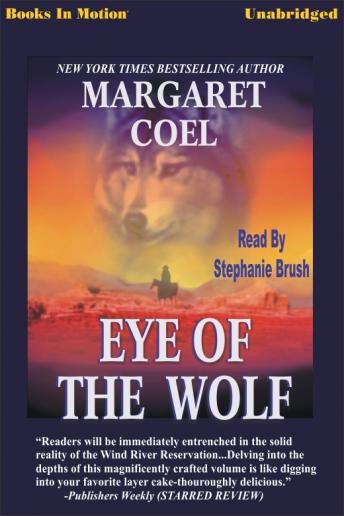 Eye of the Wolf

"This is for the Indian Priest...." The cryptic message on the answering machine was clearly meant for Father O' Malley. The unemotional voice was speaking of revenge against old enemies, and wanted O'Malley to visit the site of the 1874 Bates Battle, where Captain Bate's cavalry, lead by Shoshone warriors, massacred nearly everyone living on an Arapaho tribal grounds. Now, someone has left three dead Shoshones on the battlefield, positioned to mimic the bodies of those Arapahos killed in the historic slaughter.

Frankie Montana, attorney Vicky Holden's latest client, is a frequent guest of the reservation's holding cells, and after a recent heated encounter with the three dead men, is the number one suspect in their deaths. Despite his faults, Vicky doesn't believe he is capable of murder. Instead, she suspects that someone is trying to stir up a war between the Arapaho and Shoshone people, ripping open the still painful wounds of the past. The question is: why?