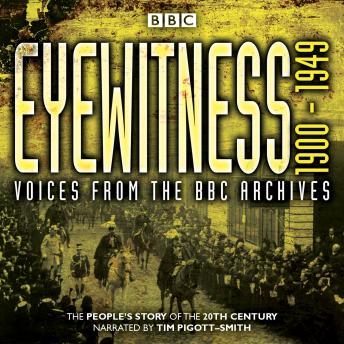 Eyewitness accounts from the BBC Archive are at the heart of this unique history of the first half of the 20th Century, narrated by Tim Pigott-Smith.

The events of 1900-1949 are described by the people who saw them happen, from the death of Queen Victoria and accession of Edward VII through the First World War, the sinking of the Titanic, the General Strike and the Great Depression, to the Second World War and its aftermath. Events both joyful and sorrowful are illustrated with fascinating and rarely heard archive recordings, with a linking narration by the historia Joanne Bourke. Thought-provoking and moving, these are the voices of the past speaking to the present day.