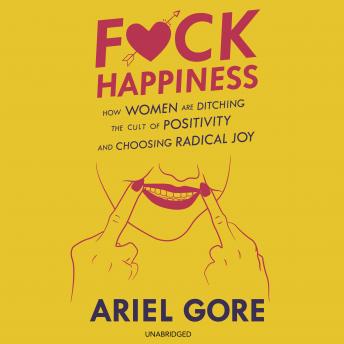 F*ck Happiness: How Women Are Ditching the Cult of Positivity and Choosing Radical Joy

Can a woman be smart, empowered, and happy?

Happiness has become a serious business. Where twentieth-century psychology focused on depression and illness, in the new millennium scientists have begun focusing on “positive psychology”—the study of happiness. Ariel Gore first became intrigued by this subject when she discovered that a class on positive psychology was the most popular course on the Harvard campus.

As she read deeper into the topic, she noticed something disturbing: everyone in this happy land was a man. Worse still, some of these new “experts” seemed hell-­bent on proving that women with traditional values and bread-winning husbands—those who had made “an effort to expect less,” according to one sociologist—were more content than women with feminist values. The more she read, the more she wondered: Can a woman be smart, empowered, and happy?

Determined to find out, Gore began her own “study in living”— a journey into the feminine history, science, and experience of happiness. Her results, chronicled with humor and curiosity in F*ck Happiness, are by turns fascinating and enriching. A woman’s happiness may not come easily and it may not take the forms prescribed by popular culture. But, as Gore discovers, it is not only possible but necessary.

F*ck Happiness is a smart, no­-nonsense, uplifting study of the real secret of joy and whether it’s truly at odds with the goals of modern women.