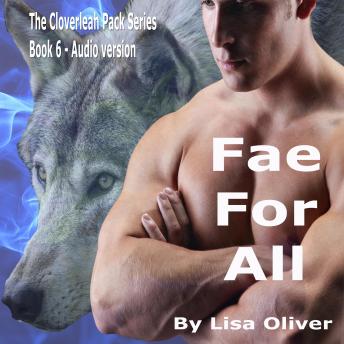 Can be read as a standalone


Jax Cooper never planned to meet his mates. A strong wolf shifter, who keeps his Fae heritage hidden, all Jax wants to do is keep his pack safe and his secrets tucked away. But when men turn up from another pack, all intent on stealing the two men Jax knows to be his, then Jax's wolf has a hard time controlling himself.


Aelfric and Fafnir have been together for three hundred years. Not that unusual for two Sidhe Fae princes. Having known since puberty that their third destined mate was a wolf shifter, they are overjoyed when Dean, the sweet Omega from the Cloverleah pack gets in touch with them to let them know some possible mates have been found. Hurrying to the Cloverleah Pack, the two men not only find their mate, but also find out that the Cloverleah pack is in trouble - and it's coming from all sides.


Trying to keep his head, and his mates, Jax has to rely on his friends from the pack to keep things safe. Between two other packs, vampires, the Shifter Council and the Fae Council all trying to intervene in what should be a simple mating process Jax has to wonder if keeping the two beautiful men, destined to be his, is worth losing his life over.


Warning: This is an m/m/m story - it contains strong language, some violence, and acts of male on male sex. This work of fiction includes a beautiful blond Fae with a tendency to have tantrums, a strong wolf shifter who would never describe himself as a nice person and a dark haired Fae who is desperately trying to hold them all together.