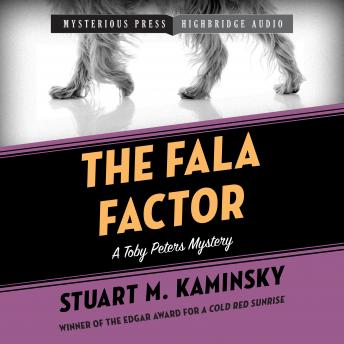 Working in Hollywood, private eye Toby Peters has met a lot of phonies. But his newest case concerns a four-legged faker who threatens the fate of the free world. A few classy dames have crossed the detective's doorstep, but none can touch the hem of the dress of the First Lady herself, Eleanor Roosevelt, who's come to him on a matter of top-secret national security.

Six months after Pearl Harbor, Mrs. Roosevelt has developed a terrible suspicion. She thinks the president's sprightly Scottish terrier, Fala, has been kidnapped and replaced by an imposter, and she wants Peters to find the real rover-for without him, all may be lost.

As usual, the First Lady is right. Peters learns that the presidential pooch is the linchpin in a fiendish plot against the White House. Fortunately, this old detective has learned some new tricks, and he has no intention of rolling over and playing dead.