Fallen: The inside story of the secret trial and conviction of Cardinal George Pell 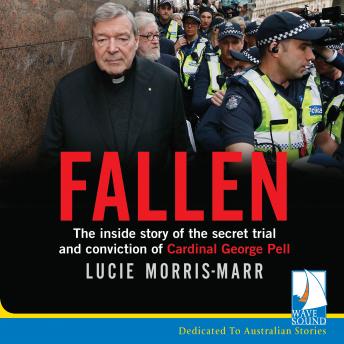 It's the most shocking scandal ever to reach the inner sanctum of power in the Holy See. The Vatican's treasurer, Cardinal George Pell, was ordered to face trial in his native Australia after being charged with multiple counts of child sexual abuse. Investigative journalist Lucie Morris-Marr, who was the first reporter in the world to reveal the allegations against the cleric, attended each day of the subsequent legal case. She lifts the lid on the proceedings, which for so long were in lock down due to a controversial media black-out. Take a front row seat in court with the author as she charts every dramatic twist and turn on the road to justice.

Fallen reveals the full story of the brutal battle waged by the prince of the church as he fought to clear his name. This riveting dispatch recounts how the cleric was trailed by a cloud of scandal as he rose to the most senior ranks of the church. The author also shares her own compelling personal journey investigating this vitally important story. Fallen will fascinate anyone interested in the failure of the Catholic Church to address the canker in its heart.

Fallen: The inside story of the secret trial and conviction of Cardinal George Pell