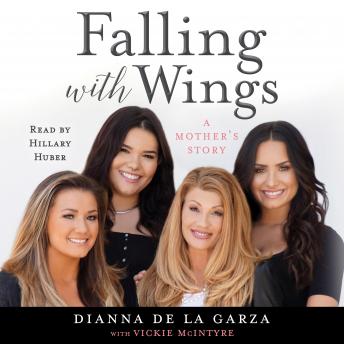 Falling with Wings: A Mother's Story

This program features a prologue read by the author

Before she was mother to global superstar Demi Lovato, she was just Dianna Hart.
In this heartfelt audiobook memoir, Dianna tells her story from the very beginning.
She had big plans of becoming a country music star, but her life went in a different direction than her dreams. She developed an eating disorder early in life to gain a sense of control in her strict upbringing. As she continued to struggle with body image and her obsession with being perfect her entire adult life, she was also met with other difficult situations. Her husband and father of her two eldest daughters Dallas and Demi had his own troubles that effected the entire family. She coped with alcohol and pills, forming a long-lasting addiction.
She's had terrible lows but also some great highs as she watched her daughters break out in Hollywood to become strong, empowered young women.
As a mother caring for daughters with addictions while continuing to battle her own, Dianna offers a unique perspective. And as a family, they have survived everything life has thrown at them and come away from it stronger than ever.
In Falling with Wings, Dianna tells listeners her story of living through and surviving adversity--with tremendous strength, love and faith.

Falling with Wings: A Mother's Story