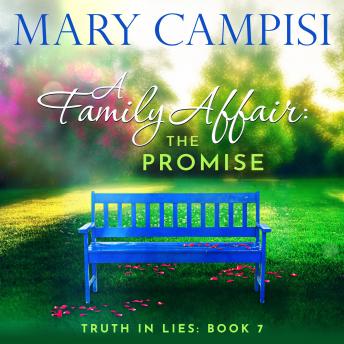 A Family Affair, A: The Promise: A Small Town Family Saga

Heartache. Betrayal. Forgiveness. Redemption... It's time to head back to Magdalena, New York, and spend a little time with the people we love to love and even a few we love to hate.

A lot has happened since readers left town in A Family Affair: Winter!

Bree Kinkaid is dealing with heartache and betrayal the only way she can--denial. Her friends can't help her, she won't listen to her parents, and she rejects offerings of support and sympathy from the town as she attempts to hold onto that magical life she wanted. But when a stranger shows up at Bree's doorstep with information about her husband, she can't pretend any longer.

And in case you were wondering what happened to Gloria Blacksworth's notebook, it's still resting in Nate Desantro's desk drawer...but not for long. Gloria might be dead, but the notebook continues to leak distrust and ill will into the community, and someone's got to stop it! There might be only one person in town equipped for the job--any guesses?

We've also got a new man in Magdalena, one badly in need of a second chance...

Grant Richot sprinted through life, a boy wonder with talent, intelligence, confidence, and charm. He never doubted the world awaited him, just as he never doubted the right woman would come into his life--but only when he was ready for her. Anyone before that was simply preparation for the one.

How wrong he was.

Years and a tragedy later, Grant arrives in Maggie Finnegan's hometown of Magdalena, New York--broken, uncertain, and searching for that second chance with the woman he cast aside. But Maggie's no longer naïve and impressionable; she's a confident, competent widow with a child, who has more at risk than another broken heart...

See you in Magdalena!

Family Affair, A: The Promise: A Small Town Family Saga

This title is due for release on April 3, 2017
We'll send you an email as soon as it is available!