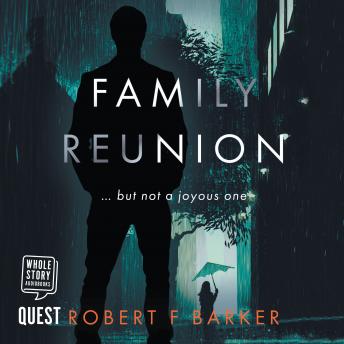 Family Reunion is a race-against-time thriller in which Jamie Carver must break through the wall of silence surrounding the illegal-immigrant community to save a family who don't even know they need saving. But can he succeed against an adversary as warped as any he has faced before?
In eastern Europe, The Monster of Yereven has escaped the asylum, and is heading here to arrange his long-planned, Family Reunion. It won't be a joyous affair. During his years in solitary, the country's most brutal mass-murderer had plenty of time to plot his vengeance against the family that gave him up to the authorities, before fleeing for a new life, elsewhere. Still haunted by past events, Detective Jamie Carver's task is to find The Monster's family before he does. Two problems. One, no one knows who they are. Two, he's barred from operational duties. But when a trail of bodies points to the killer closing in on his prey, Carver has no choice but to go rogue, even if it risks destroying everything he holds dear!

I really struggled for the first 2/3 of the book. Too disjointed. Really enjoyed the rest of the book but wouldn’t rerecommend.