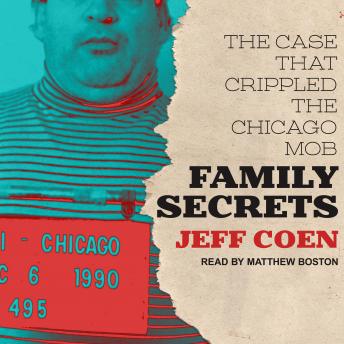 Family Secrets: The Case That Crippled the Chicago Mob

Even in Chicago, a city steeped in mob history and legend, the Family Secrets case was a true spectacle when it made it to court in 2007. A top mob boss, a reputed consigliere, and other high-profile members of the Chicago Outfit were accused in a total of eighteen gangland killings, revealing organized crime's ruthless grip on the city throughout the 1960s, 1970s, and 1980s.

Painting a vivid picture of murder, courtroom drama, family loyalties and disloyalties, journalist Jeff Coen accurately portrays the Chicago Outfit's cold-blooded-and sometimes incompetent-killers and their crimes in the case that brought them down. In 1998 Frank Calabrese Jr. volunteered to wear a wire to gather evidence against his father, a vicious loan shark who strangled most of his victims with a rope before slitting their throats to ensure they were dead. Frank Jr. went after his uncle Nick as well, a calculating but sometimes bumbling hit man who would become one of the highest-ranking turncoats in mob history, admitting he helped strangle, stab, shoot, and bomb victims who got in the mob's way, and turning evidence against his brother Frank.

Family Secrets: The Case That Crippled the Chicago Mob