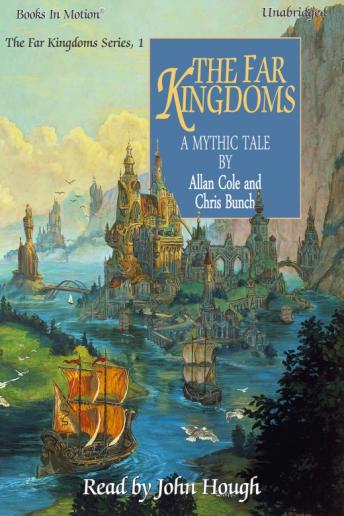 The Far Kingdoms...a place of bright sunlight surrounded by dark, deadly wilderness. A place where the princes and magicians were kind and wise beyond all imagination. A place where wine and song were always sweet, every purse was fat with gold, and every heart at ease. The Far Kingdoms...said to lie in the distant east, across the straits of the Narrow Sea, beyond the benighted Pepper Coast, in uncharted territory. The Far Kingdoms...a place no one could reach even if it were real - which surely it wasn\'t. Young, pampered Amalric Antero cared only for real places and possible dreams. The time had come to Find His Tradewind, to make the traditional journey seeking out new lands, new riches, new customers as his merchant father, and his father\'s father, had done before him. He meant only to do as all young traders did: travel to the known lands in the west and return home having proved himself able to deal well with his father\'s customers. Nothing more was expected. But then he met Janos Greycloak, a dashing soldier who dabbled in forbidden magic and who carried on him proof of riches and mysteries beyond imagination. And suddenly Amalric found himself setting out on the adventure of a lifetime, a daring and perilous quest through unknown lands peopled by nightmares, to seek the ultimate in fables...The Far Kingdoms!