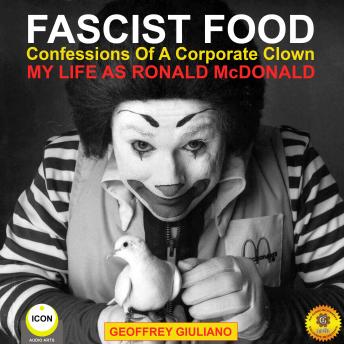 Well-known author, actor, and activist Geoffrey Giuliano's first real job was playing the marvelous, magical burger king in a vaudeville-type traveling magic show in 1977. Culminating in an all-star show in support of the Special Olympics at the Kennedy compound in Hyannis Port, Massachusetts, Giuliano became friends with the family and continues work on behalf of the charity. Working closely with Eunice and Sargent Schriver over the years, the talented Giuliano is also an advocate for animal rights who founded two longstanding charities with his late wife Vrnda Devi. Dasa Food for All was a successful food pantry run in association with the Food Bank of Western New York and also the Spirit of Saint Francis sanctuary, which rescued cows and other at-risk animals from slaughterhouses, giving them a pastoral, peaceful home for life.
After leaving Burger King in 1979, Geoffrey went on to portray the murderous meat clown Ronald McDonald, performing live and appearing in the infamous television commercials so many remember. Along the way, however, he had a change of heart and saw the suffering, cruelty, and violence against these innocent animals - and to the children who were encouraged by sophisticated promotional campaigns to eat the unhealthy food. After leaving McDonald's after two years (and successfully suing the firm in Toronto) Giuliano participated in the infamous McLibel campaign (which also became a major motion picture in which he costarred).
Now, some 30 years later, at 65, Geoffrey Giuliano is still traveling extensively preaching, teaching, and talking about the needless violence perpetuated in the name of fast food to millions of factory farm animals, who are not only contributing to the destruction of the delicate ecosystem, but also putting kids at risk for conditions like diabetes, heart attack, and even stroke from what is the worst kind of salt and sugar-laden junk food.