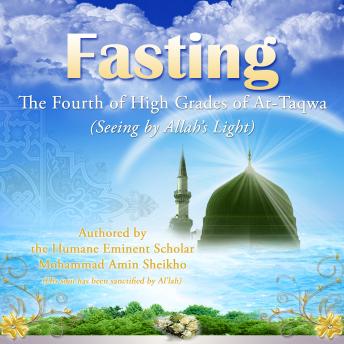 Fasting: The Fourth of High Grades of At-Taqwa

The Fruit of Fasting:

In a holy saying, the Almighty says: “All deeds of son of Adam are done for themselves, except fasting; it is done for Me, and therefore, it is Me who gives the reward of it”

And in the Holy Quran He, the almighty, says: “[Fast] the month of Ramadan in which the Quran was revealed, a book of guidance for people” when the Envoy of God (cpth) fasted he felt magnification and appreciation for the Almighty Allah; there and then the meanings and realities of the Holy Book, the Quran, were revealed to his noble and pure spirit.

If human fasts this month as it should be fasted, they will come to be illuminated by God’s Light and witness the truth. This illumination helps them distinguish between good and evil and hear the Words of the Great Creator, and thus they become guided.

“With proofs of guidance and criterion” by virtue of your closeness to the Almighty Allah, you can discriminate between good and evil. At this stage, you will flood with benefits for yourself and for all creation.

Discrimination between good and evil is not an easy matter. All the Greeks, the Roman, and the Arab philosophers failed to attain this ability despite their great philosophy.

“So that you may magnify Allah and render thanks [good deeds] to Him for giving you His Guidance”. Before belief, the believer is blind-hearted; but when they fast really, they will have their heart’s eye opened and thus join the people of heart sight. The Envoy (cpth) said: “An atom of the deeds of people of heart sight is equal to all deeds of the humans and the jinn”

Once the believer truly fasts, they will gain the Night of Valuation. Before this, they are sick in heart, perhaps in body, too; but when they witness this Night their spirit will be recovered and their body will be graced with a garment of good health and become cured from all sorts of diseases and ailments.

Such human is the one who truly magnifies Allah for the guidance He obliged them with. This magnification is to be expressed when performing the prayer of feast: a glorification sensed in heart, not only said in word, through which they soar in a holy witnessing, praising God for His great Favor and Generosity.

Indeed, their spirit has become qualified for rendering thanks to God, so they set to guiding humanity to what it aspires of happiness and everlasting beatitude, leading it to the Creator of every excellence, beauty, and majesty.

This is the reality of fasting by which a believer attains the degree of piety, that is a constant illumination by Allah’s Light. By God, this is the uppermost degree of wishes.