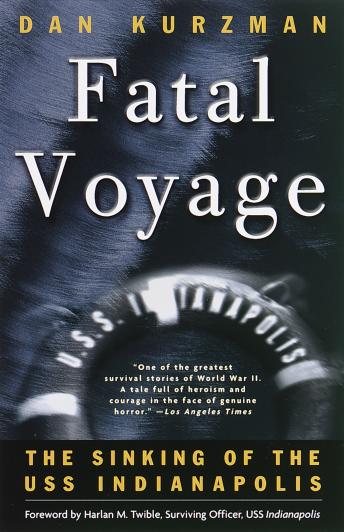 Fatal Voyage: The Sinking of the USS Indianapolis

Shortly after midnight on July 30, 1945, the Navy cruiser USS Indianapolis was torpedoed by a Japanese submarine in the Philippine Sea. The ship had just left the island of Tinian, delivering components of the atomic bomb destined for Hiroshima. As the torpedoes hit, the Indianapolis erupted into a fiery coffin, sinking in less than fifteen minutes and leaving nine hundred crewmen fighting for life in shark-infested waters. They expected a swift, routine rescue, unaware that the Navy high command didn’t even realize that the Indianapolis was missing. Help would not arrive for another five days.

Drawn from definitive interviews with key figures, Fatal Voyage recounts the horrific events endured as the number of water-treading survivors dwindled to just 316. Each gruesome day brought more madness and slow death, from explosion-related injuries, dehydration, and, most terrifying of all, shark attacks. But the pain did not end when the men finally returned home: The Indianapolis’s commander, Captain Charles B. McVay III, was court-martialed for causing the clearly unavoidable disaster.

With a new afterword chronicling the fifty-five-year campaign by Indianapolis survivors and their supporters to win public vindication for Captain McVay, this classic is restored, along with memories of the Indianapolis crew.

Fatal Voyage: The Sinking of the USS Indianapolis