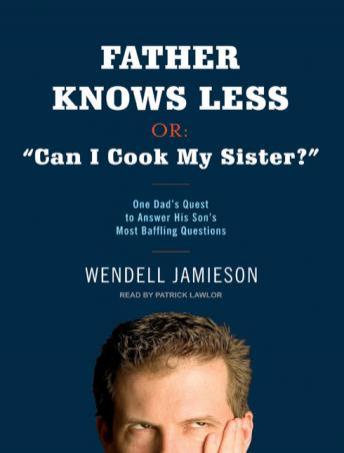 Father Knows Less, or: 'Can I Cook My Sister?': One Dad's Quest to Answer His Son's Most Baffling Questions

A New York Times editor sets out to answer the peculiarly marvelous questions of his precocious young son-and winds up on an unexpected journey of his own.

Wendell Jamieson's son, Dean, has always had a penchant for...odd questions. 'Dad,' he asked, apropos of nothing, 'what would hurt more-getting run over by a car, or getting stung by a jellyfish?' 'Dad, why do policemen like donuts?' 'What's it feel like to get stabbed?' 'Does Mona Lisa wear shoes?' 'Can I cook my sister?'

But what began as a lark quickly grew into something larger. Blending a charming father-son journey with the surprising, sometimes hilarious questions and answers it spawned, Father Knows Less offers a heartwarming exploration of that childlike curiosity that lives within us all.

Father Knows Less, or: 'Can I Cook My Sister?': One Dad's Quest to Answer His Son's Most Baffling Questions