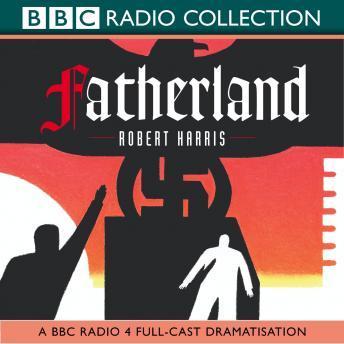 Anton Lesser stars as a Berlin detective who stumbles upon the 20th century's most terrifying secret in this BBC Radio 4 full-cast dramatisation of Robert Harris's bestselling novel. The year is 1964, and it's a week before Hitler's 75th birthday. Nazi Germany won the Second World War, Churchill is living in exile in Canada, Joseph Kennedy is President of the United States, and King Edward and Queen Wallis are puppet monarchs of the United Kingdom. In this dimension, history took a very different turn in 1942 to the one we are familiar with... Produced by the award-winning John Dryden, this dramatisation of Robert Harris's thriller, with an atmospheric soundtrack recorded on location, is a rollercoaster ride of intrigue, suspense and passion.

I didn't care for this at all. It jumps around too much and sometimes the sound effects are too loud to hear and understand the talking. I feel like I've jumped into something that was already going on and I missed the whole point. Not enjoyable at all.