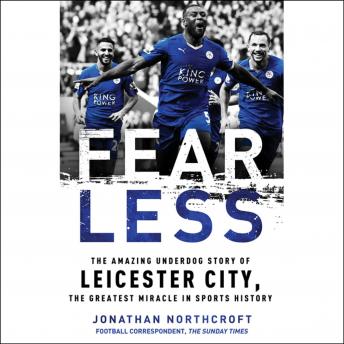 'The odds of the Foxes winning the Premier League at the start of the season were the same as the Yeti or the Loch Ness Monster being proven to exist, Christmas being the warmest day of the year in England or Barack Obama playing cricket for England after he left the Oval Office.' -- ESPN

On March 21, 2015, Leicester City lost their sixth game in eight matches. Without a victory for two months, they were rock bottom of the English Premier League, heading for certain relegation to the lower division, and about to miss out on a once-in-a-lifetime financial bonanza of TV money and opportunity. As usual, London and Manchester would clean up, the rich would get richer, and the hopes of the small, overlooked, multicultural city would sink.

But Leicester started to win. They stayed up; and in the new season they kept on winning. Favorites for relegation, rank outsiders as potential champions (their 5000 -- 1 odds were the longest in the world for any major sporting event), their entire squad had been assembled for less than the cost of a single player for Manchester City. Still, they beat Manchester City and Liverpool, Tottenham and Chelsea: the most incredible cast of written-offs, grafters, misfits, and journeymen came together for the season of their lives.

This is the story every underdog dreams of, every small town with a much larger, more affluent neighbor hopes for, and a triumph that defies logic and expectation.