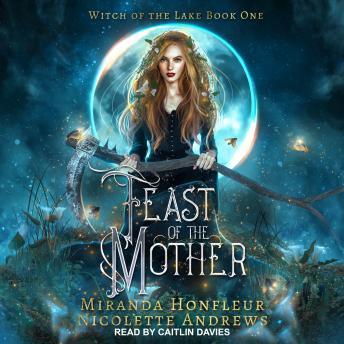 Feast of the Mother

Beneath the murky waters of the lake, an ancient being slumbers, and Brygida is its servant. Kept sheltered in the woods by her mothers from the nearby village, Brygida has never had so much as a friend-until the day she meets a charming stranger painting by the lake. He invites her to the village's harvest feast, but her taste of the forbidden ends with a murder.

Called into service for the first time, Brygida must take up her ancestral duty as Reaper of Death and solve the murder within three days. If she brings the murderer to the lake on the third day, the being she serves will be sated. If she fails, Brygida herself will be drawn beneath the murky waters, and the village massacred. There's only one problem: the main suspect is her charming painter, Kaspian.

As Brygida investigates, the dangers are many and answers few. The village and her family stand against her, and with time running short, the lake demands a price. Brygida believes Kaspian is innocent, but can she stake her life on it, when failure means condemning the rest of the village, and being dragged into the deep . . . ?

At first I wasn't sure how to feel about the book, but actually really enjoyed it. I like the way the world building and character development was done and was actually quite surprised by the "who done it" concept. Also was surprised by the real villain of the tale and found it very interesting and enjoyable.

Narrator was fine. I was however not into this book I tried got a few hours in but not for me. It’s hard when you’re 30, young adult can come across too young. This book felt geared towards a younger audience.

I tried really heard to read this story and listen to it on audible and it just wasn't for me. If you like very young main characters with over bearing parents they have to over come, and enjoy them repeating all the rules they were raised by over and over, this book is for you. I just got caught up in the cycle and couldn't see past how horrible I thought the parents were. I also got tripped up with all the Morach Witches explanations.

Good book. A lot of twists. There was more than one lesson that was received from the book. I did have trouble getting into it at first.

Feast Of The Mother is the first in the Witch Of The Lake series. I thoroughly enjoyed this story. Brygida starts out so young and naive but tragedies and life quickly bring her out of her shell and you really see her personality became stronger and more self aware. The storyline was really refreshing and original with a surprising and unpredictable ending!! The audio narration was really well done and very fitting. I'm looking forward to more!

Feast of the Mother was a dark murder mystery with a magically twist. Brygida is a witch whose first duty is to find the murder, but if she fails she and the town will be doomed. She struggles with following her gut or following what she is being told. The story was good and the characters well developed.

I want to say this is a good book and I like the lessons in this book. But when it started off I thought that it was going to be like sleeping beauty and I have to say I am glad its not. I like how this book tells you to follow your gut instincts.

Ohh a mixture of fantasy and mystery wrapped up with witchy elements is fantastic! The audiobook was great and the narrator did a wonderful job of portraying several characters. I enjoyed the world building of getting to know a bit of the town and the customs of the local witches. The characters were great and the story was pretty good. It is a bit of a slow pace but it picks up pace halfway through. Enjoyable story!!

Very engaging dark fairy tale encompassing witches, demons, mystery, action and romance. Brygida is coming of age as a young witch, and trying to find a balance between fulfilling her duties and her attraction to Kaspian and his world. This is the first I've read from these authors and I'm looking forward to reading more in the series.

did not disappoint was looking forward to listening to this one (as I have previously read) and I must say wow.

Great book and narration. Enjoyed the story and the characters.