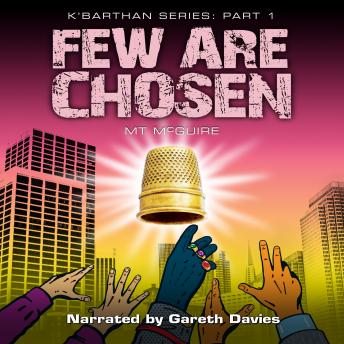 When the finger of fate points ... duck!

Meet The Pan of Hamgee: coward, unwilling adventurer and, by some miracle, K’Barth’s longest surviving outlaw. He just wants a quiet life so working as getaway driver is probably a bad career move. Then he falls in love at first sight with a woman he hasn't even met who comes from an alternative reality. That’s when things really begin to get complicated.

Meet Ruth Cochrane: she’s the Chosen One, destined to play a pivotal role in saving K’Barth from a cruel dictator. She’s never heard of K’Barth, though. She’s a public relations executive from London and she’s totally unaware of the chaos about to hit her life.

Meet Lord Vernon: power hungry psychopath on the brink of world domination. He wants to cement his hold on K'Barth by kidnapping the Chosen One and forcing her to marry him. Only one person is standing in his way: someone who doesn’t even realise it, The Pan of Hamgee. For The Pan, and Ruth, that’s a deadly problem.

A word with the authorQ - Why did you write the K'Barthan Series? Why is it special?

A - There's a saying: if the book you want doesn't exist you have to write it.I love funny British authors, comedic sci fi, epic fantasy, adventure, action, humour - or humor. Misfit characters are great, the weirder the better. I like genre mashups: StarWars, alien races, flying cars, car chases, static powered laser guns. Dr Who meets James Bond ... sort of. K'Barth is kind of first contact, only not. There are many quirky characters from 6ft Swamp Things with antennae, to cute furry Blurpons with fluffy ears, big button eyes and a penchant for extreme violence. But the eternal questions they face mirror ours.