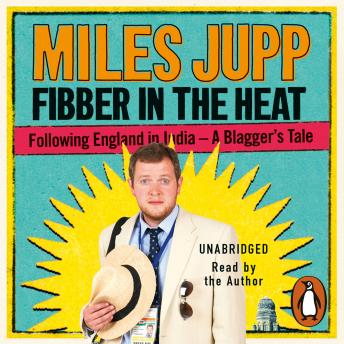 Fibber in the Heat

Fanatical about cricket since he was a boy, MILES JUPP would do anything to see his heroes play. But perhaps deciding to bluff his way into the press corps during England's Test series in India wasn't his best idea.

By claiming to be the cricket correspondent for BBC Scotland and getting a job with the (Welsh) Western Mail, Miles lands the press pass that will surely be the ticket to his dreams. Soon, he finds himself in cricket heaven - drinking with David Gower and Beefy, sharing bar room banter with Nasser Hussain and swapping diarrhoea stories with the Test Match Special team. Amazing!

But struggling in the heat under the burden of his own fibs, reality soon catches up with Miles as - like a cricket-obsessed Boot from Evelyn Waugh's Scoop - he bumbles from one disaster to the next. A joyous, charming, yet cautionary tale, Fibber in the Heat is for anyone who's ever dreamt about doing nothing but watching cricket all day long.

Fibber in the Heat