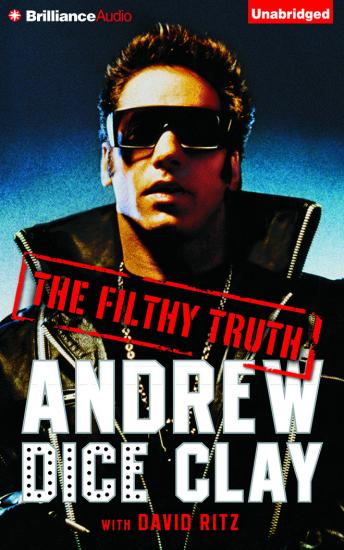 In The Filthy Truth, Andrew Dice Clay chronicles his remarkable rise, fall, and triumphant return. Brooklyn-born Andrew Clay Silverstein started out at Pips Comedy Club in Sheepshead Bay and eventually made a name for himself a decade later with a breakout appearance on the Rodney Dangerfield HBO special Nothing Goes Right. With that single TV appearance he became the new king of comedy, and Dicemania was born. He was the first and only comedian to sell out over three hundred sports arenas across the country to an audience of more than twelve million people. He was also the first comedian to sell out Madison Square Garden two nights in a row. But Dice’s meteoric rise and spectacular fame brought on a furious backlash from the media and critics. By the mid-nineties, though still playing to packed audiences, the turmoil in his personal life, plus attacks from every activist group imaginable, led him to make the decision to step out of the spotlight and put the focus on raising his boys. The Diceman was knocked down, but not out. Taking inspiration from what Frank Sinatra once told him—“You work for your fans, not the media. The media gets their tickets for free”—Dice is now back with critically acclaimed roles in HBO’s Entourage and Woody Allen’s Blue Jasmine, and is once again playing to sold-out audiences. Filled with no-holds-barred humor and honesty, The Filthy Truth sets the record straight and gives fans plenty of never-before-shared stories from his career and his friendships with Howard Stern, Sam Kinison, Mickey Rourke, Sylvester Stallone, Axl Rose, and countless others.