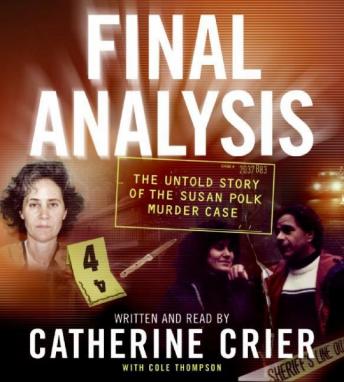 In October 2002, Susan Polk was arrested for the murder of her husband, Felix, kicking off what would become one of the most captivating murder trials in recent memory. Now, former judge and current Court TV host Catherine Crier turns an analytical eye to Susan's story, delving into her past and examining how over twenty years of marriage culminated in murder. When Susan was in high school, Felix, who was more than twenty years her senior, had been her psychologist, and during their sessions as therapist and patient, a romantic entanglement began. These troubling beginnings grew into a difficult marriage that produced three healthy boys but led to disturbing accusations of abuse from both Felix and Susan.

Crier dissects this dangerous relationship, exposing the painful psychology that motivated this complex marriage. She masterfully reconstructs the tumultuous chronology of the Polk family, telling how Susan and Felix struggled to control their rambunctious sons and disintegrating marriage in the years and months leading up to Felix's death. Here Crier also elucidates the methodic police work of the murder investigation and scrutinizes the remarkable trial, exploring Susan's struggles with her defense attorneys and her shocking decision to represent herself. Dark, psychological, and terrifying, Final Analysis is a harrowing look at the recesses of the human mind and the trauma that reveals them.