The Final Days: The Last, Desperate Abuses of Power by the Clinton White House 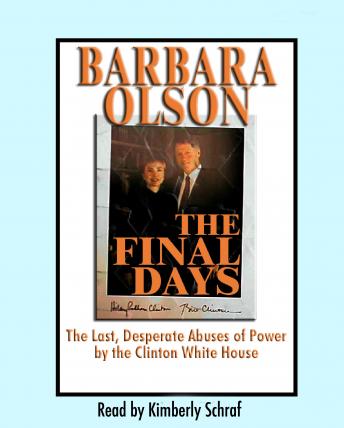 Barbara Olson was a trenchant critic of the Clinton White House, which she considered to be the home of two of the slickest kleptocrats ever to disgrace the Oval Office. In THE FINAL DAYS, Olson depicted the excesses and outright crimes she claims took place as the Clintons prepared to leave office. These include the granting of pardons to people of dubious legal status, such as the shadowy financier Marc Rich, and the last-minute signing into law of thousands of executive orders, a feat comparable only to John Adams's appointment of the "midnight judiciary." Olson's indignation knew no bounds when it came to the Clintons, and if you feel the same way, you'll relish every minute of this book.

Barbara Olson was killed in the hijacked plane flown into the Pentagon during the terrorist attack on America.

"Olson was a pundit superstar...fighting the culture wars on a wide range of fronts." (The National Review)

Final Days: The Last, Desperate Abuses of Power by the Clinton White House