The Final Reveal: Book 8 of SEALs of Steel 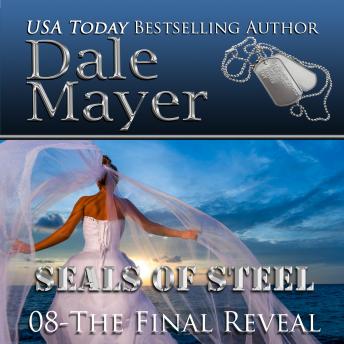 Book 8 of SEALs of Steel

This is a novella tying up the SEALs of Steel series.

A prosthetic design engineer, Kat Greenwald is in love with Badger Horley. The former SEALs team leader is the love of her life. But she’s seen and heard firsthand of the fears and commitment issues Badger and his closest friends–once part of Navy special operations teams–struggle with on a daily basis. During their weekly get-togethers, the women in love with these former SEALs open up to each other about their longing to tie the knot and start families.

More than two years ago, Badger was badly injured after the truck his eight-man unit were in hit an antitank landmine. While he and his team have finally discovered the truth behind that devastating set-up, Badger sees the reality of his precarious future. His health could decline at any moment and he wants Kat to know exactly where the door to get out is if and when it does. The last thing he wants to do is invite pity, especially where the woman he loves is concerned. In a perfect world, he would have proposed to her the day they met. In the world he lives in, he can only conclude that harboring fears are always better than regrets.

But Kat isn’t the type of woman to fear hard times and she’s willing to take a leap of faith as far out into the unknown as she can get if it means her most fervent wish comes true.