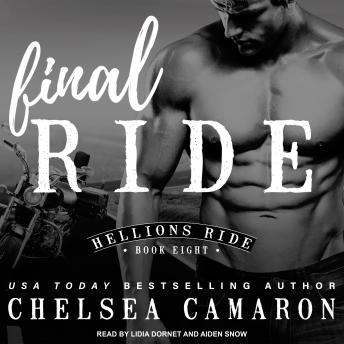 Everything I have never had is right in front of me. Family, it's mine for the taking. For the first time in my life, I found stability in the Hellions MC. From the ground up, I've been loyal to my brothers.

Now the time has come when I may have to choose between the family I've never known or the club I've built and given my all to.

Richard 'Frisco' Billings is the California kid who rode into Haywood's Landing when the Hellions were needing an extra man. As an original, he's been with the club from day one. After growing up with no real place to call home, he's found solid ground. All of it crashed around him when secrets were revealed and he found out he missed all the formative years with his daughter, who was raised in an enemy's club.

Amy Mitchell was lost her whole life until she was found by the Hellions MC. She spent years with the club, rebuilding her life and finding a place where she could belong.

When a new young woman comes into the home she has with Frisco, will she still fit into his world? Will Frisco find a way to make everything work together? Will this be his final ride with the Hellions as life takes him down a different road?