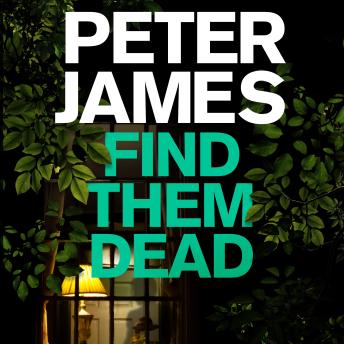 Ending his secondment to London’s Met Police, Roy Grace gets a tip-off about a drugs mastermind operating out of Brighton. On his first day back in his old job, he is called to a seemingly senseless murder.

Gradually, Grace’s investigation draws him into the evil sphere of an utterly ruthless drug dealer on trial. A man prepared to order the death of anyone it takes to enable him to walk free from court.

Sitting in the jury is Meg Magellan, whose daughter's life is being threatened by a stranger who tells her that if she ever wants to see her alive again, it is very simple. At the end of the trial, all she has to do is make sure the jury says just two words . . . Not guilty.

Although the Roy Grace novels can be read in any order, Find Them Dead is the sixteenth title in the bestselling series. Discover more of the Brighton detective’s investigations with Left You Dead.

Easy to follow if you have done jury service.

Enjoyed all these books

Good story line, although it did drag on a bit in places. Good ending to see the baddie getting his fair due. Great use of accents to differentiate characters.

Easy to follow the storyline when listening on and off. Thoroughly enjoyed listening.