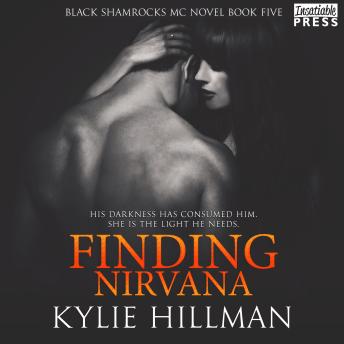 It's said that only in our darkest hour do we find light. That may be true for the lucky ones. When your light has been extinguished and pitch-black bleakness has taken hold, you could be excused for doubting that it will ever be reignited. In the past when people mentioned Joel O'Brien, they talked about 'the quiet one'. The boy who was the family's voice of reason and their go-to guy for wisdom well beyond his years. Nowadays, they whisper about the 'crippled one'. The man who radiates darkness, who wallows in his self-pity, and refuses to find a way to deal with the injuries he sustained at the beginning of the war that's threatening to engulf the Black Shamrocks MC. Sascha Koswalski is the light of her family's life. With a smile that could brighten the day of the most hard-hearted, the single mother's innate exuberance lessens the pain of her physiotherapy clients. She's yet to find a patient who doesn't respond to her sunny nature and skilled hands. Until Joel. The stubborn, angry man might be the one patient she fails. Unable to crack his protective shell, Sascha is on the verge of giving up when Joel shows her another side of himself. Buoyed by the knowledge that there is a man filled with hope hiding beneath his cold veneer, can she rehabilitate more than his broken body? Will she be the light that reignites his belief in himself and sets them both on the path to FINDING NIRVANA? DISCLAIMER: This book contains depictions of graphic situations and is not suitable for all readers.