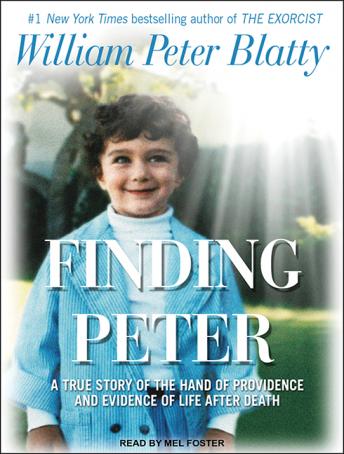 Finding Peter: A True Story of the Hand of Providence and Evidence of Life after Death

William Peter Blatty, the bestselling author and Oscar Award-winning screenwriter of The Exorcist, lived a charmed life among the elite stars of Hollywood. His son Peter, born over a decade after The Exorcist, grew from an apple-cheeked boy into an 'imposing young man with a quick, warm smile.' But when Peter died very suddenly from a rare disorder, Blatty's world turned upside down.

As he and his wife struggled through their unrelenting grief, a series of strange and supernatural events began occurring, and Blatty became convinced that Peter was sending messages from the afterlife.

A true and unabashedly personal story, Finding Peter will remind those in grief that our loved ones truly do live on.

Very Interesting character who like my self is a big believer in co-incidences. I choose this as my first audio book just 2 weeks after William died and I had no idea until I read his obituary a few days ago. To me that's a Coincidence. He was brought up in the catholic faith, seem to have lost it and regained it in the latter years. Have never watched the movie "The Exorcism or read the book but after listening to Williams biography which this book is I am more likely to read and/or watch it. I believe his mother was the rock and strength that help him to be the outstanding character he became. God rest his soul and I hope he is reunited with his son peter, brother Raymond and his totally devoted mother.